Notice: While Javascript is not essential for this website, your interaction with the content will be limited. Please turn Javascript on for the full experience.

A persistent data structure is defined as a data structure that preserves the previous version of the data when the data is modified. Such data structures are effectively immutable, as operations on them do not update the structure in-place, but instead always yield a new updated structure (see [0] for more details.)

This PEP proposes to add a new fully persistent and immutable mapping type called frozenmap to the collections module.

The bulk of frozenmap's reference implementation is already used in CPython to implement the contextvars module.

The following use cases illustrate why an immutable mapping is desirable:

Lastly, CPython [1] already contains the main portion of the C code required for the frozenmap implementation. The C code already exists to implement the contextvars module (see PEP 567 for more details.) Exposing this C code via a public collection type drastically increases the number of users of the code. This leads to increased code quality by discovering bugs and improving performance which without a frozenmap collection would be very challenging because most programs use the contextvars module indirectly.

A new public immutable type frozenmap is added to the collections module.

frozenmap implements the collection.abc.Mapping protocol. Therefore, getters, membership checks, and iteration work the same way that they would for a dict:

frozenmap instances are immutable. That said, it is possible to efficiently produce mutated copies of the immutable instance.

The complexity of mutation operations is O(log N) and the resulting frozenmap copies often consume very little additional memory due to the use of structural sharing (read [6] for more details.)

The method creates a new frozenmap copy with a new key / value pair:

The method produces a copy of the frozenmap which does not include a deleted key:

Calling the union() method to add/replace N keys is more efficient than calling the including() method N times.

The method allows efficient copying of a frozenmap instance with multiple modifications applied. This method is especially useful when the frozenmap in question contains thousands of key/value pairs and there's a need to update many of them in a performance-critical section of the code.

The below example illustrates how mutating() can be used with a context manager:

As frozenmap implements the standard collections.abc.Mapping protocol, so all expected methods of iteration are supported:

Iteration in frozenmap, unlike in dict, does not preserve the insertion order.

frozenmap instances can be hashable just like tuple objects:

It is possible to use the standard typing notation for frozenmaps:

The key design contract of HAMT is the guarantee of a predictable value when given the hash of a key. For a pair of key and value, the hash of the key can be used to determine the location of value in the hash map tree.

Immutable mappings implemented with HAMT have O(log N) performance for set() and get() operations. This efficiency is possible because mutation operations only affect one branch of the tree, making it possible to reuse non-mutated branches, and, therefore, avoiding copying of unmodified data.

Read more about HAMT in [5]. The CPython implementation [1] has a fairly detailed description of the algorithm as well. 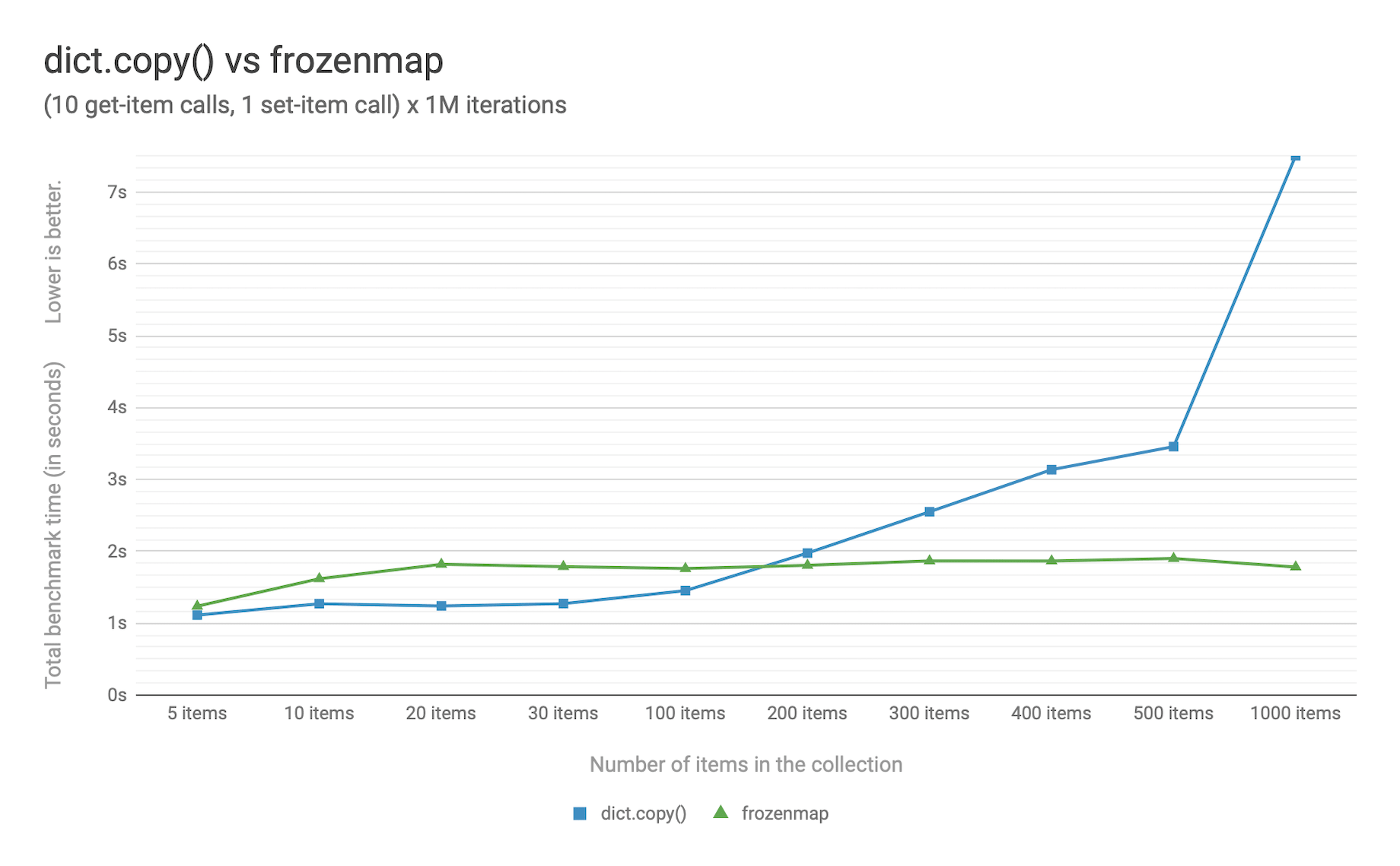 The above chart demonstrates that: 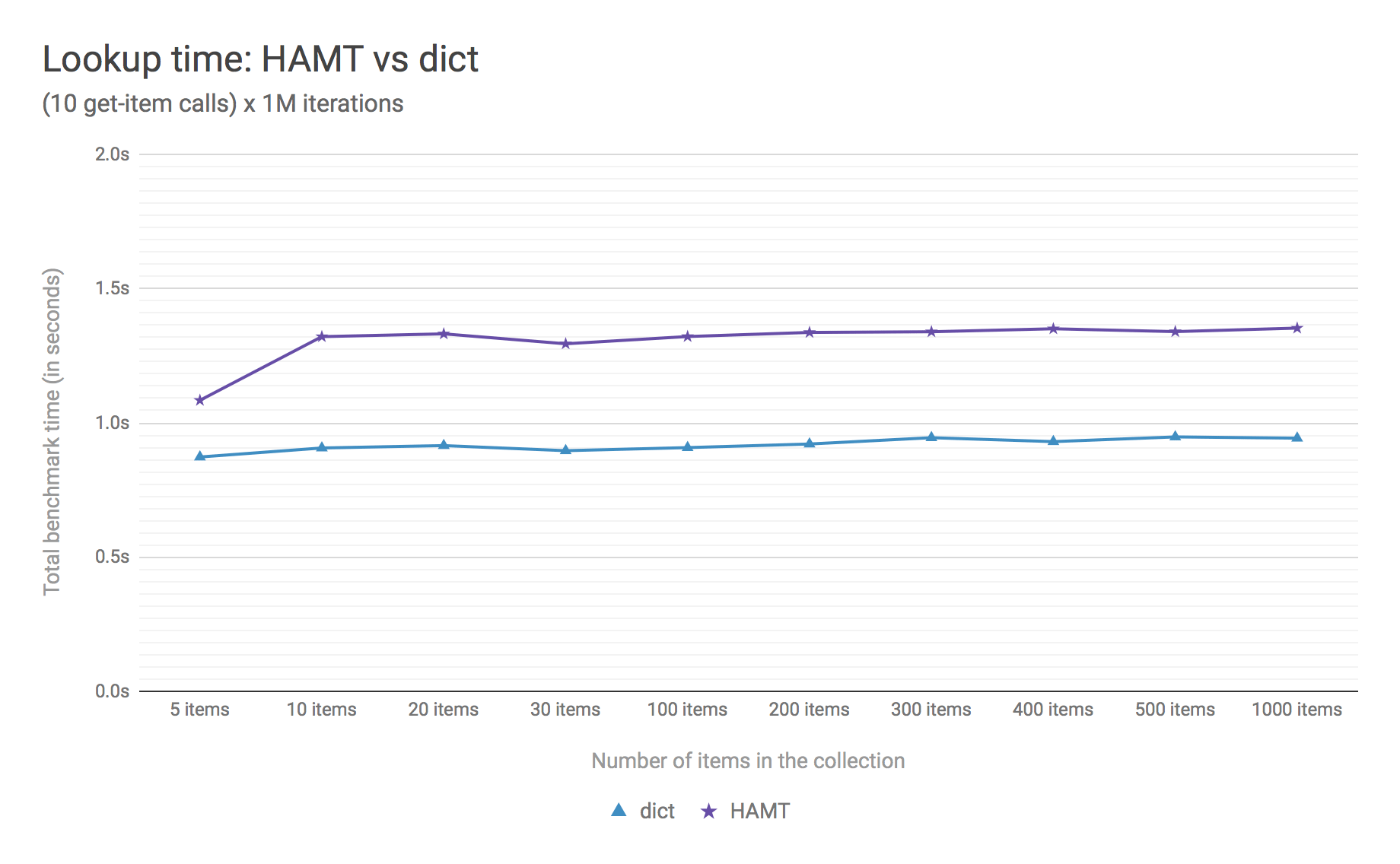 Figure 2 compares the lookup costs of dict versus a HAMT-based immutable mapping. HAMT lookup time is ~30% slower than Python dict lookups on average. This performance difference exists since traversing a shallow tree is less efficient than lookup in a flat continuous array.

Further to that, quoting [6]: "[using HAMT] means that in practice while insertions, deletions, and lookups into a persistent hash array mapped trie have a computational complexity of O(log n), for most applications they are effectively constant time, as it would require an extremely large number of entries to make any operation take more than a dozen steps."

The lower-case "frozenmap" resonates well with the frozenset built-in as well as with types like collections.defaultdict.

"Dict" has a very specific meaning in Python:

The proposed frozenmap does not have these mentioned properties. Instead, frozenmap has an O(log N) cost of set/get operations, and it only implements the abc.Mapping protocol.

The full implementation of the proposed frozenmap type is available at [2]. The package includes C and pure Python implementations of the type.

I thank Carol Willing, Łukasz Langa, Larry Hastings, and Guido van Rossum for their feedback, ideas, edits, and discussions around this PEP.

This document is placed in the public domain or under the CC0-1.0-Universal license, whichever is more permissive.

The Python Software Foundation is the organization behind Python. Become a member of the PSF and help advance the software and our mission.